Well, Charlie Jane Anders has, and her short stories are imaginative and fun to read. Like her novel “All the Birds in the Sky” (which I reviewed a few months ago), this book of short stories, “Six Months, Three Days, Five Others,” is original, fresh, funny sci-fi.

The last story in the book, a side story to “All the Birds in the Sky,” is about a couple who are given a cat by a stranger who tells them it will give them nine years of good luck. (It took me a while to realize it had some of the same characters from Anders’ novel, but when I did, it was like getting bonus features at the end of a great movie.)

Because it’s so rare for me to find short stories I enjoy, and also rare to find original and accessible, readable sci-fi, I wanted to know more about this author. Anders’ bio is an entertaining read. 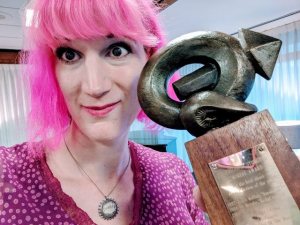 The pink-haired author’s Amazon profile says she’s the only person to be “a fictional character in a Star Trek novel and in one of Armistead Maupin’s Tales of the City books.”

She co-edited a book called “She’s Such a Geek: Women Write About Science, Technology, and Other Nerdy Stuff,” she organizes Writers With Drinks, and she has put on wacky fund-raising events like a Ballerina Pie Fight. She has won a bunch of awards, including a Hugo for this story collection, and a Nebula for “All the Birds in the Sky.”

Another great book I read recently is George Saunders’ “Fox 8,” a short tale about a fox who learns how to speak the language of “Yumans” by listening at the window of a mother reading bedtime stories to her children.

One of Chelsea Cardinal’s sweet illustrations in “Fox 8.”

Now you may be wondering, why is this fairy tale-sounding book on a sci-fi blog? And I’ll tell you: Because talking animals aren’t real- they’re fantasy. And I like talking animals. Let’s not get bogged down by technicalities.

It’s a really beautiful book, which is maybe a strange thing to say about a fox who says things like, “Grate Leeder woslike: I have spoken. And something in me woslike: Grate Leeder, bla.”

It is a little bit sad and violent but also funny, and a little bit hopeful too. It’s the first thing I’ve read by the award-winning author (you may have heard of his bestselling novel “Lincoln in the Bardo”), but I’m looking forward to reading more of his books.

These little books would make great last-minute gifts for the (adult) book lover in your life. Merry Christmas!