What a weekend! We finally got to see what happened after the “snapture” of “Avengers: Infinity War,” with the release of “Avengers: Endgame,” and we are now in the final stretch of “Game of Thrones.”

If you haven’t seen “Endgame” yet, or the newest “Game of Thrones,” come back later. There are spoilers all over this post.

The Avengers assemble in “Avengers: Endgame.”

OK let’s talk about this  movie. I was very excited to see how the writers dealt with the aftermath of Thanos’ gauntlet snap which destroyed half of all life in the universe in “Infinity War.”

Overall, I enjoyed “Endgame.” I love the big ensemble cast of these last two films because my favorite characters are in here: the Guardians, Dr. Strange, and now Ant-Man and Captain Marvel.

I laughed, I cried, and I didn’t even mind that it was three hours long. However. I do have some issues with the movie, and I’m not just talking about all the time-travel stuff. (More on that in a minute.)

The first beef I have involves Captain Marvel. We just had the very awesome “Captain Marvel” movie come out last month. That film really got me fired up to see her kick some butt in “Endgame.” How cool was it when she showed up to save Tony in outer space at the beginning of the movie? So awesome! And then she has only a small part in the film. She is probably the most powerful superhero in the entire franchise and she barely has any lines. They explain it away by saying she has other planets to save – we aren’t the only ones who need help. OK, that makes sense. But … I wanted more Captain Marvel!

What happened to Goose, the flerken from “Captain Marvel”? I want answers!

Samuel L. Jackson who had such a big, great part in “Captain Marvel,” had zero lines in “Endgame.” Also, where is Goose, the cat, er, flerken, from “Captain Marvel”? Fail.

I know Iron Man and “the Cap” have been in this franchise for a long time, so I get that it was sort of their movie. But I would have loved the butt-kicking superhero girls (blink and you’ll miss it) moment more had there actually been more girl power in the film. Instead, that scene sort of felt like, “We’ll put this here to make the women happy.”

Another scene that felt forced was the support group in which someone discusses the state of the gay dating scene on post-apocalyptic earth. I’m all for representation but this seemed like they put it in as an afterthought. It was a throwaway, especially in a three-hour movie in which some of our favorite characters didn’t even get lines!

I also thought the jokes were a bit much, by which I mean they didn’t just tell the joke – they told the joke three times. Like the “Captain America’s ass” thing that went on forever, and the joke that Thor is fat and constantly drunk. We get it. He’s fat. And drunk.

The time travel thing. I knew time travel would have to be involved in this movie, because our heroes weren’t going to just accept that half the population is gone. And how else could they have fixed that without going back in time? I was actually excited to see how they were going to handle this, but ironically that ended up being one of the more annoying things in the film.

After making so many comments about “time travel doesn’t work like it does in the movies, this isn’t Back to the Future,” etc., it turns out that the writers don’t really know how time travel works either. If they did, wouldn’t they realize that if they kill the past Thanos who time travels to the future, that means the snap never would have happened? They say it doesn’t alter the timeline, but … doesn’t that alter the timeline? Am I just supposed to take their word for it, even if it doesn’t make sense?

The problem of Thanos himself is just the beginning. But I’m not going to address every time travel issue. To be fair, I loved that they revisited the other movies – it was fun. So I tried not to let logic or science get in the way of my enjoyment. This is a movie with talking trees and raccoons, set in a universe where the laws of gravity don’t apply, so I’m not going to get too hung up on the implausibility of their time-travel explanation.

I’ve talked to other people who attempted to convince me it actually did make sense but I still don’t think it does. Maybe there is some alternate version of me in a different timeline that understands it.

I’m going to discuss the newest episode of “Game of Thrones” so if you are not caught up and you don’t want me to spoil it for you, go away and come back later.

Jon Snow’s direwolf Ghost and Daenerys’ Dothraki army prepare to battle against the Army of the Dead, in “The Long Night,” the newest episode of HBO’s “Game of Thrones.”

Did anyone else hold their breath for the entire 82-minute episode? It was maybe the most tense episode of the series. It became clear early on that they were sticking with the poor strategy they outlined in the previous episode – using Bran as bait for the Night King, with Theon to protect him, and using the crypt as shelter for those not fighting. A crypt. No one really thought that one through.

The living fought the dead in pitch black. CNN’s AJ Willingham said half the scenes looked like “a bunch of rats fighting in a shoebox,” and I can’t think of a better description. The night was indeed dark and full of terrors – zombies to be exact. Lots of zombies. More zombies than I, personally, feel comfortable with, but I’m not a huge fan of horror so even though I was surprised that after eight years of worrying about the Army of the Dead, they didn’t even get past Winterfell, I was also relieved that the battle ended when it did, even if the army falling with the Night King wrapped up the conflict with too tidy a bow. The Long Night was really just one long night after all, and lasted only one episode (and is also the title of this episode).

Jaime and Brienne lived to fight another day.

Theon held his ground longer than I thought he would, before predictably biting the dust. We also lost Edd, Beric, Jorah, and brave Lyanna Mormont. Melisandre returned just long enough for a mini pep rally and to light some literal fires, and a metaphorical fire under Arya, before removing her patented, age-defying, gemstone choker (I need one of those – do they sell them in the HBO shop?) and dying of very old age.

We love to hate Melisandre, and for good reason – one of her worst deeds was killing a little girl (Shireen), but Theon killed two kids, and Jaime pushed one out a window. More time, though, was given to those characters’ backgrounds and story arcs. Melisandre’s reappearance didn’t serve much purpose beyond tying up a loose end (she said she’d be back so here she is).

There were several characters – and relationships – that were redeemed in this episode, but the Hound’s scenes with Arya, and Tyrion’s scenes with Sansa, for example, felt meaningful and earned, where Melisandre’s death was anticlimactic. 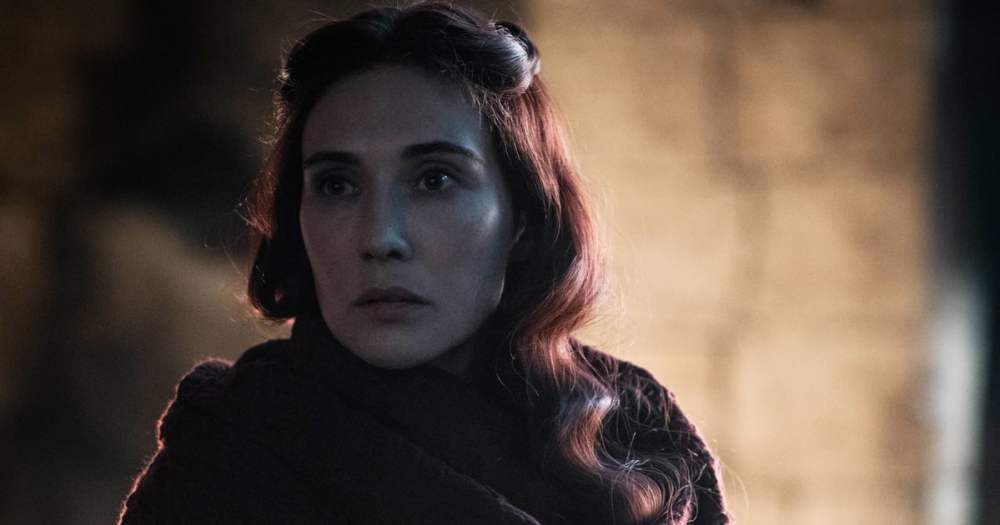 The Red Woman does not need your forgiveness.

“The Long Night” was exciting (and terrifying), but I was expecting a bigger twist – for Arya to wear someone else’s face, for Bran to warg into a human like he did with Hodor, or for some sort of prophecy-fulfilling, aha moment. Is Arya the prince(ss) who was promised? She did bring an end to the Long Night, but what about the other elements of the prophecy, such as the sword Lightbringer? There was a lot of wasted dialogue about the Lord of Light and the old and new gods, etc., if it doesn’t come up again.

There are three more episodes. I am full of anticipation and dread as I know that “all men must die,” and that, as Ramsay Bolton told us, “If you think this has a happy ending, you haven’t been paying attention.”

But we can still dream, as Varys does, of “peace and prosperity, a land where the powerful do not prey on the powerless.” We’ll see.