It’s a jolly holiday with Mary! “Mary Poppins Returns” is in theaters Dec. 19.

Lots of new movies are coming out in theaters in the next couple months, some of which I’ve previously mentioned on my blog: “Mary Poppins Returns” is coming Dec. 19, and “Aquaman” is out on Dec. 21.

Emily Blunt plays Mary this time around. Lin-Manuel Miranda, Colin Firth, Meryl Streep, Emily Mortimer, and Angela Lansbury also star, and Dick Van Dyke makes a cameo. I’m not holding my breath that it will be as good as the original, but I have a hunch it will be better than the underwhelming plot of Disney’s last live-action fantasy, “The Nutcracker and the Four Realms.”

A cool drink of water

I normally prefer Marvel over DC, but I love, love, love Wonder Woman, and now we have Jason Momoa playing Aquaman. There’s some plot about Aquaman being caught between two worlds because he’s half human and half Atlantean, or something? Anyway, did I mention Jason Momoa?

Does this picture make you thirsty? Jason Momoa stars as “Aquaman,” coming Dec. 21.

“Once Upon a Deadpool,” which is “Deadpool 2” re-edited, re-released, and re-gifted in a PG-13 package, comes to theaters Dec. 12. They removed the R-rated stuff and recycled the framing device from “Princess Bride” – Deadpool is reading the story to Fred Savage. See for yourself:

Some of the proceeds from the new film will go to a charity called F*ck Cancer (renamed Fudge Cancer for the 12-day run of the new film, in keeping with the PG-13 rating).

You may or may not want to bring your kid to the new version of “Deadpool 2,” but one that looks a bit more kid-friendly is “Spider-Man: Into the Spider-Verse,” out Dec. 14. In the new animated movie, there are multiple Spider-Mans (Spider-Men?) in different dimensions or parallel universes, or whatever you want to call them. I haven’t read the Spider-Verse comic – I just want to see the movie because the trailer looks pretty cool:

I’ve been hearing about the movie “Replicas” for a couple years, and it’s apparently finally going to be out Jan. 11. I honestly don’t know that much about it, just that it’s about a scientist who wants to bring his family back after they die. Might be interesting. Might suck. Of course I will go see it simply because they put Keanu Reeves in it. (Damn you, producers of “Transformers”!) 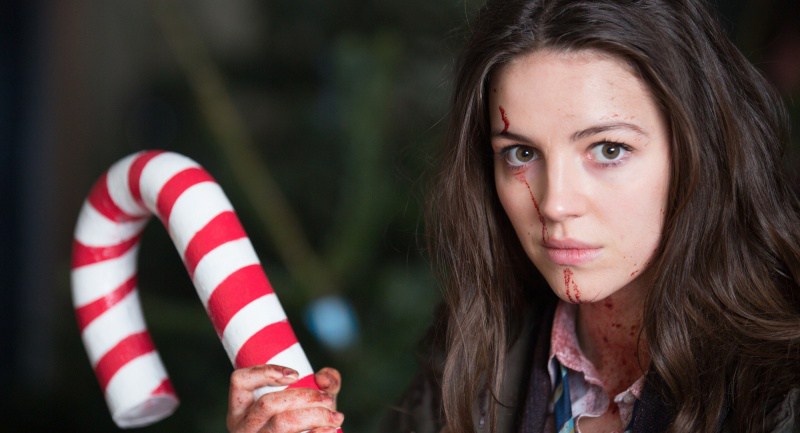 Ella Hunt stars in “Anna and the Apocalypse.”

I haven’t seen much new sci-fi on the small screen lately. I’m mostly re-watching “Game of Thrones” in anticipation of the eighth and final season coming in April.

I did see the miniseries “Maniac,” on Netflix, and I loved it. Set in the not-so-distant future, the story centers on a trippy drug trial, where Annie (Emma Stone) meets Owen (Jonah Hill). Gabriel Byrne, Justin Theroux, and Sally Field also star. If you’re into stuff that’s weird, quirky, funny, and charming, you should check it out.

In other TV sci-fi news, an adaptation of Alan Moore’s awesome comic book “Watchmen” is coming to HBO. Unlike the 2009 film, which was (in my opinion) a faithful adaptation of the comic, showrunner Damon Lindelof has said the new series will be a new story set in the same world, but with different characters, set in the present day.

The new show will be coming out sometime in 2019. While you wait, I recommend reading the original comic book and/or watching the movie. It’s a great story. (Also it’s rated R; this one is not for the kids.)