I read “Station Eleven,” Emily St. John Mandel’s fourth novel, in just a couple of days. It’s one of those books you can’t put down. I have a thing for post-apocalyptic tales, and I love novels like this one, in which the narrative takes the reader back and forth through time. This one connects the events from the pre-collapse past with those in the desolate place the world has become 20 years after the “Georgia Flu” pandemic wipes out most of the planet’s population.

I hear you saying “Another disease-wipes-out-most-of-humanity story?” You think you have heard this story before, but you haven’t.

A traveling symphony/Shakespearean troupe caravans through what is left of the Midwest – tiny communities that have formed in the wake of the pandemic. (Replace bands of marauding Indians with religious cults, and covered wagons with old pickup trucks, and it’s almost the Wild West.)

The lead caravan has written on it the words “Survival is insufficient” (taken from an episode of Star Trek: Voyager). And indeed, survival is not enough, which is why the troupe brings music and Shakespeare to the survivors of the apocalypse.

The Star Trek quote is also tattooed on one of the actor’s arms. Kirsten, who was a child when the flu hit, is mocked for having among her few belongings a glass paperweight. But she treasures it for its beauty. Also among her prized possessions are two issues of a rare graphic novel called “Station Eleven,” about a scientist living aboard a space station.

The story of Station Eleven parallels the main narrative, reminiscent of Tales of the Black Freighter, the comic within the comic book “Watchmen.” It’s interesting to see the comic book tale unfold, and how it relates to the plot.

Kirsten is my favorite character, sort of a tough, Katniss-like heroine, but Kirsten is only one of five  main characters. My one complaint is that I wish the book were longer, so that there would be more time to get to know the interesting characters whose stories are woven together in this carefully crafted, plot-driven story.

Mandel is a gifted writer. This is one of those books that I love but also hate because I will never be able to write something as beautiful as this haunting story about what it means to be part of the human race: “We bemoaned the impersonality of the modern world, but that was a lie … it had never been impersonal at all. There had always been a massive infrastructure of people, all of them working unnoticed around us, and when people stop going to work, the entire operation grinds to a halt.”

It’s true we don’t realize how much we take for granted until it’s gone – things like running water, electricity, antibiotics, but also family, familiarity, the simple pleasures of art, music, and good food.

“What would you miss?” the inside cover of the paperback asks. I’m sure I’m not the only one who was reading this novel late into the night, grateful for my sleeping family, for the electricity that made it possible for me to read in the darkness, and for every little thing that is part of our daily lives that we often don’t give a second thought. 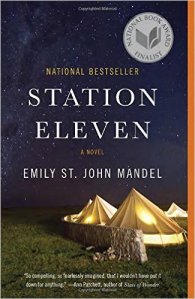