In cool sci-fi news: I recently read that

Sony Pictures Television has optioned Charlie Jane Anders’ book, “The City in the Middle of the Night,” for series development, with Sharon Hall, who is also an executive producer on “The Expanse.”

I’m super excited about this because Charlie Jane Anders is awesome, and because I love “The Expanse,” so I’ve got my fingers crossed that the adaptation is as cool as the novel, which is set in the future, on the tidally locked planet of January. Because one side is always facing the sun (like our moon), one side of the planet is always dark and cold, and the other is always light and hot. The inhabitants (descendants of humans who fled Earth) live in the strip of dusk between the light and dark sides of the planet.

The main character, Sophie, lives in Xiosphant, an authoritarian city with mandated sleeping hours and curfews. When she gets in trouble with the law, she is thrown into the dark and cold night, and left for dead. But she survives, and is changed by her experience.  There is a lot of crazy stuff going on; I couldn’t put it down. If you like dystopian sci-fi, check it out. 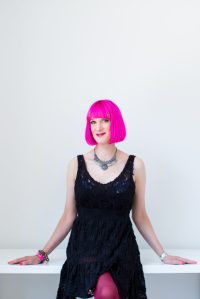 I also read and loved Anders’ other works, her novel “All the Birds in the Sky,” and her short story collection “Six Months, Three Days, Five Others.” You can read my review here:

No word yet on when we will see the new series. In the meantime, Anders is working on the adaptation of one of my favorite comics, Brian K. Vaughan’s “Y: The Last Man.”

The Vertigo comic centers on Yorick Brown and his pet monkey Ampersand. A plague has wiped out every other male mammal, and as far as Yorick knows, he’s the last man on Earth. The series is expected to premiere on FX next year.

Oh “Carnival Row,” I had such high hopes for you! The Amazon Prime series is about fairies and other mythological creatures forced to flee their homelands to (some version of) Victorian-era London.

I do love cutie pie Orlando Bloom but watching him in his role as a detective is about as thrilling as watching paint dry, and he doesn’t have much chemistry with his love interest, played by Cara Delevingne as adorable fairy Vignette. I’m not sure who was in charge of casting but I suspect the series would be more steamy if they’d found a couple with a little more heat between them. (Is it just me?)

Vignette and Philo phone in the fairy romance on “Carnival Row.”

Don’t get me wrong; I did enjoy the premise of the show (despite the fact that it seems to have stolen Saga’s horns and wings) and it held my interest enough that I wanted to keep watching. There is a lot of mystery, political intrigue and multiple subplots, some of which are really interesting and others which are sort of meh. The big finale was not super satisfying but it seems to have set up a potentially better storyline for Season 2, so I’m still in.

The Dark Crystal: Age of Resistance

The 1982 film charmed and terrified me when it came out in theaters. (I was 7.) The Netflix prequel series is also charming – and very dark. I guess Netflix is banking on nostalgia. The comical yet smarmy pleading of the chamberlain is here, as is the adorable dog-like creature (known as Fizzgig in the original). I like the Gelfling and Podling puppets. The new series is appealing for those of us who miss Jim Henson’s lovable Muppets.

It’s as true to the original as any  ’80s kid could want, but there’s a lot of emphasis on the “dark” in Dark Crystal. I’m sure this would be hard to avoid in any prequel series, though, as we know from the film that Jen and Kira were the last of their kind – and we know why.

I’m sure I’m not the only one who is a little disheartened by the creepiness and oppressive nature of the series. But I am trying to hang in there; I’m only a few episodes in, and I’m reserving final judgment until I’ve seen all 10. Stay tuned.

“Do you think I look Skeksi?”

I wasn’t expecting to be so blown away by this Amazon Prime series, based on a comic book. For starters, the story – superheroes as villains – has been done before, in “Watchmen.” But “The Boys” is different enough that it still seems original, and I loved it. It’s (very) grisly, but it’s a binge-worthy thrill ride.

Jack Quaid and Karl Urban are Hughie Campbell and Billy Butcher, two of the titular “boys,” enemies of the superheroes who turn out to not be so super.

“Ad Astra” opens this weekend. Brad Pitt plays an astronaut who searches for his father in the outer edges of the solar system.

The TV series “Mr. Robot” will return for its fourth and final season on Oct. 6 (USA Network).

“Gemini Man” comes out Oct. 11. Will Smith plays an assassin who is forced to fight a younger clone of himself.

The new season of the sci-fi series “The Expanse” will air on Amazon Prime on Dec. 13.

And last but not least: “Star Wars: The Rise of Skywalker” will be in theaters on Dec. 20.

Credits: “The City in the Middle of the Night,” by Charlie Jane Anders, Tor Books; “Carnival Row,” Amazon Prime, “The Dark Crystal: Age of Resistance,” Netflix; “The Boys,” Amazon Prime.