One great thing about living near Los Angeles is being close to all the cool exhibits at the museums, and one that I did not want to miss was Guillermo del Toro: At Home with Monsters, at the Los Angeles County Museum of Art.

From Guadalajara, Mexico, del Toro now resides in Los Angeles, where he is currently working on a film called “The Shape of Water.” He also is the creator of the FX series “The Strain.”

The collection displayed at LACMA is huge and very impressive. Of course it includes memorabilia from his films – costumes, drawings, notebooks, and props – but it also includes a lot of cool stuff from his collection of art, books, artifacts, and life-sized sculptures of people including Edgar Allan Poe, H.P. Lovecraft, Ray Harryhausen and several others.

The exhibit is organized by the themes that run through del Toro’s films. The first is “Childhood and Innocence,” and includes props and drawings from “Pan’s Labyrinth” and other items in his collection that pertain to this theme.

Another theme is “Victoriana,” evident in his gothic romance/ghost story “Crimson Peak.” The name of del Toro’s residence Bleak House was taken from a Charles Dickens novel. (And in case you’re wondering, this is a separate house from the one he lives in with his family. This one is just for all his cool toys.)

In the “Magic, Alchemy, and the Occult” section, we learn that del Toro is heavily influenced by the writer H.P. Lovecraft as well as a series he loved as a child called “Man, Myth & Magic: An Illustrated Encyclopedia of the Supernatural.” 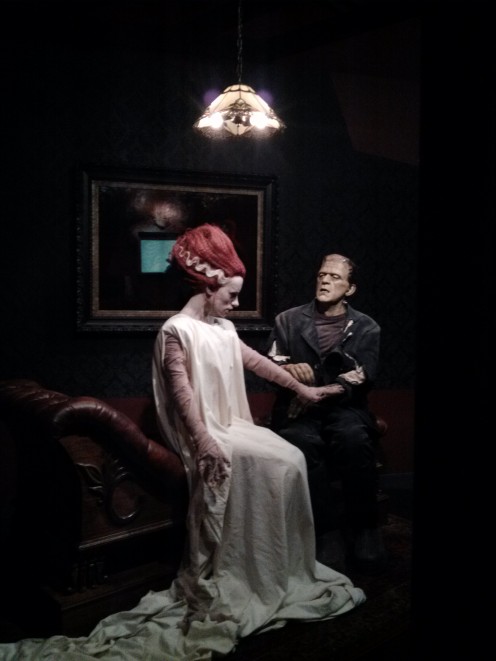 Inspired by “Planet of the Apes” (1968), a young del Toro filmed a display of his toy figurines with his father’s Super 8 camera, a pivotal moment: “When I first projected that first Super 8 reel, something happened that was absolutely life changing,” he said.

Del Toro’s self-described “Frankenstein fetish” is evident in the exhibit “Frankenstein and Horror,” an homage to Mary Shelley’s famous monster, as well as other famous movie monsters. “Freaks and Monsters” shows del Toro’s fascination with sideshow “freaks,” and how this influences his work.

There are also areas dedicated to “Death and Afterlife,” lucha libre (Mexican masked wrestling), a recreation of del Toro’s rain room (not to be confused with the other Rain Room at LACMA), and so much more.

Guillermo del Toro: At Home with Monsters is at LACMA until Nov. 27, and will travel to Minneapolis and Toronto in 2017. For more information, go to http://www.lacma.org/guillermo-del-toro#about-the-exhibition